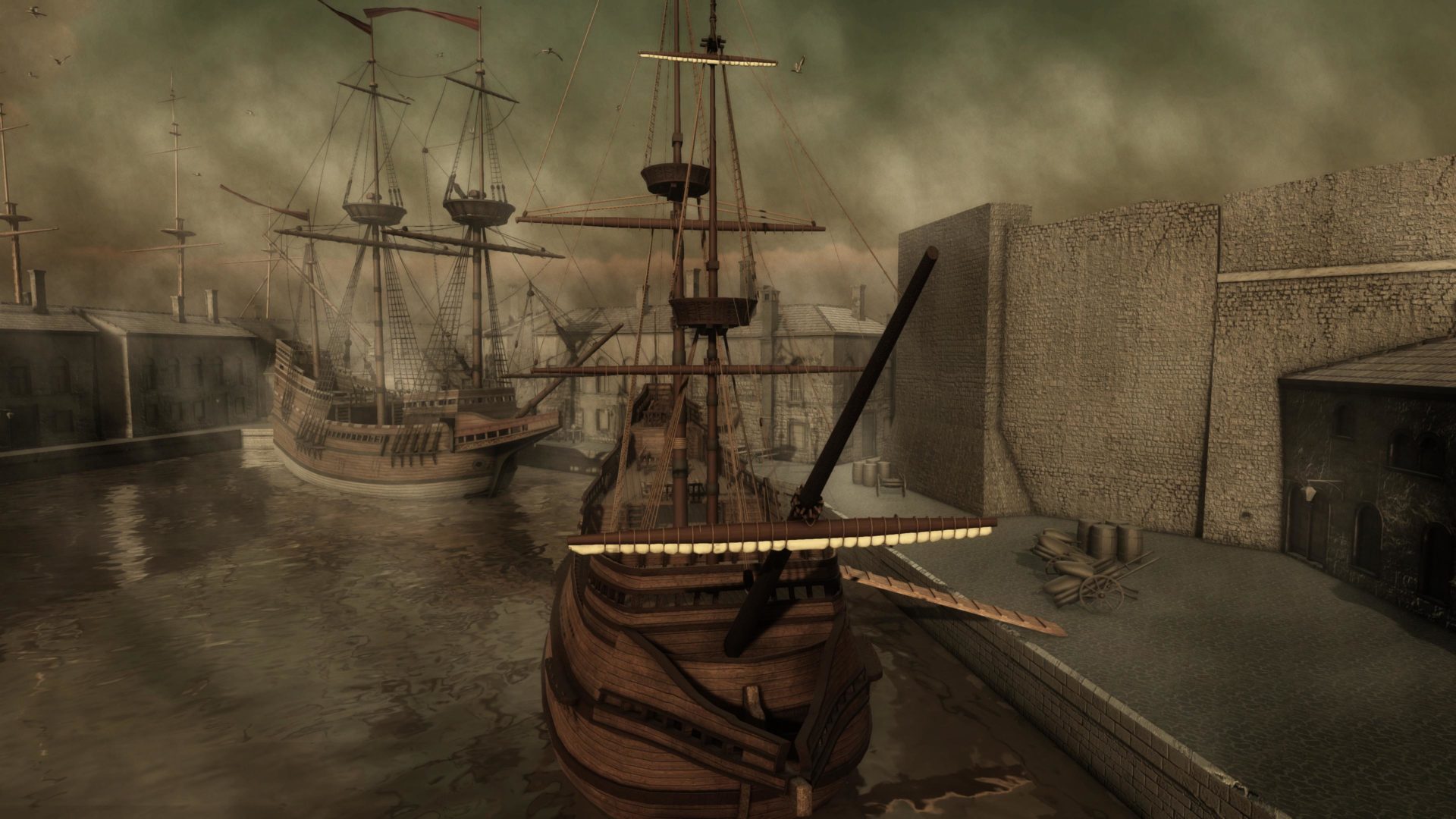 IN ORDER TO DEVELOP A DEMONSTRATION OF THE ‘ART OF THE POSSIBLE’, ESPECIALLY FOR USE IN EARLY PRESENTATIONS AND EXHIBITIONS TO POTENTIAL STAKEHOLDERS, WE FELT IT WAS NECESSARY TO PUT TOGETHER A SIMPLE, BUT EXPLORABLE VR SCENARIO OF A REASONABLY ACCURATE MODEL OF THE MAYFLOWER, AND TO LOCATE THAT MODEL WITHIN A HARBOURSIDE CONTEXT.

Unlike the Anne project of 2014, skilled resources for developing such a demonstration from scratch were, at the time, very scarce. However, given the existence of 3D assets available online, we decided to use these as a starting point and to develop a scenario that could be hosted within the Unity 3D games/rendering engine and explored in real time, both by a user at a conventional PC workstation, and by one using a range of contemporary VR head-mounted displays.

Interestingly, we discovered that the Turbosquid site also offered a 3D model of the Speedwell. The Speedwell was a fully rigged, 60-ton pinnace, purchased by the Pilgrims in Leiden, The Netherlands. The ship sailed from Delftshaven in July of 1620 to rendezvous with the Mayflower and their English counterparts in Southampton. Both ships sailed for the New World a month later, but the Speedwell was found to be in such a poor seaworthy state, leaking badly once in the English Channel, both ships were forced to return to England, mooring up at Dartmouth. A second sailing attempt from Dartmouth also ended in failure, both ships returning once again, this time to Plymouth. On 16 September 1620, the Mayflower continued the voyage on her own.

The VR model of the Mayflower was, in fact a “merger” of two models acquired from Turbosquid, see here and here.

Both versions were available in either Autodesk’s 3ds Max format. Once converted into the Autodesk-owned FilmBoX (FBX) format, the resulting models were in one of the 3D file formats readily accepted by the Unity real-time rendering package. An FBX file format contains nearly everything related to a 3D or VR scene, including cameras, lighting, rigs and textures, minimising the developer’s effort when importing a model into another 3D tool, such as Unity. Indeed, one of the models was already available in an FBX format. The model of the Speedwell used for the demonstration can be seen here.

The accuracy of this model was questionable, as the main hull structure was pretty much identical to the Mayflower, in both layout and size (in reality, the Speedwell was a much smaller vessel). However, the mast and sail layout were different, as were some of the deck structures. For the purposes of this early demo, we judged the model to be adequate. The ship was also available in an FBX format.

In the absence of a harbour model resembling Plymouth’s Barbican, we selected a simple 3D scene, simply to give a nautical context to the demonstration. The model used in this case, which was available in FBX format, was an earlier version of the one seen here.

Once in Unity, we added various atmospheric effects, such as lighting and mist, together with water motion and a sky box. The resulting scene can be explored, either using a VR headset and hand controllers, or in ‘desktop’ VR mode, using a mouse to ‘look around’ and the W-A-S-D or arrow keys of a keyboard to move.  The resulting scenario, featuring both ships are shown below.

Also at this stage in the project, we conducted a simple investigation to evaluate the capability of the model to host multiple low-detail virtual passengers and crew (avatars). As described later, in order to preserve the real-time performance of VR demonstrations such as this, it is important that detailed 3D human representations are only used for close-up scenes; more distant avatars need to be very simplistic, in visual terms, but with the illusion of reality being achieved using convincing motion behaviours.

Given the early stage of the project, the result was acceptable, but it was apparent that we would need to devote further time and effort in order to make the virtual ship’s complement more believable in the long run.