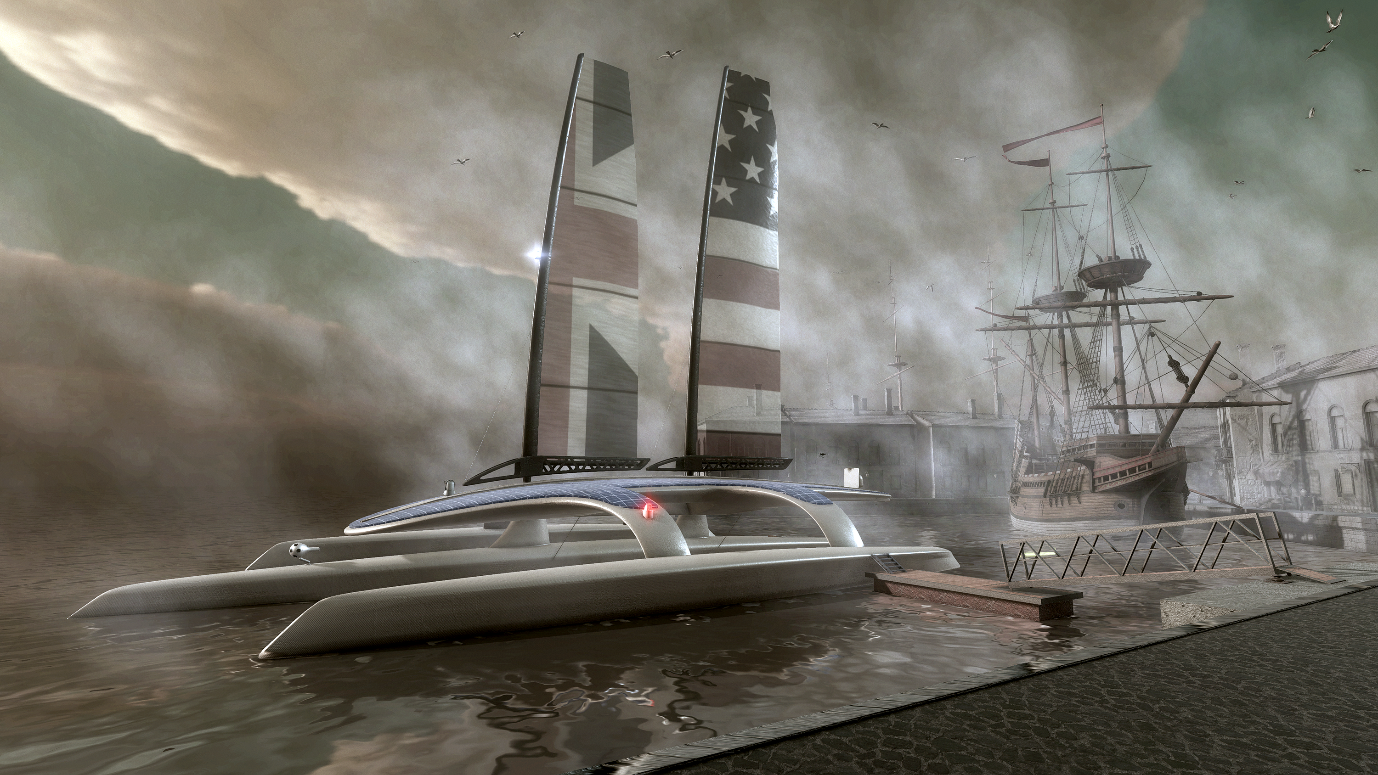 DURING THE COURSE OF THE VIRTUAL MAYFLOWER PROJECT, AN OPPORTUNITY PRESENTED ITSELF TO WORK ALONGSIDE ANOTHER IMPORTANT DEVELOPMENT SCHEDULED FOR 2020.

This opportunity came about following the Team’s support in May of 2015 for Plymouth-based MSUBS Ltd, undertaking some drone-based video filming in Cattedown, at the mouth of the River Plym, of one of the company’s submersible vehicles, destined for the USA’s Special Forces.

In October 2016, MSUBS agreed to team up with the University of Birmingham’s HIT Team, with the aim of investigating how to explore how VR and AR could be exploited in the development of the Mayflower Autonomous Ship (MAS), an unmanned surface craft that was to be designed to cross the Atlantic in 2020, commemorating the Pilgrims’ pioneering journey 400 years ago.

In the four years since that agreement, the MAS design has changed significantly, but, thanks to the existence of comprehensive computer-aided design (CAD) models of the evolving vessel, it has been possible to support MSUBS in illustrating its main functions and onboard systems, both for public engagement and technical conferences. In addition, the VR recreations made use of the original Mayflower and simple harbour scenario, allowing users to compare the ‘then and now’ and giving them the capability to venture onboard both ships.

Although the MAS design was subjected to a range of modifications over the four years, in essence three fundamental designs were visualised using VR techniques. The first version took the form of a twin-fin trimaran equipped to carry a variety of advanced sensors, including drones launched from the stern of the ship, together with Autonomous Underwater Vehicles (AUVs) to conduct oceanographic research on route.

The second version took the form of a single fin trimaran, with no deployable air of subsea systems.

Version three, the hull to which was built by Aluship Technology in Gdansk, Poland, features a hybrid propulsion system, using wind and solar power with a back-up diesel generator, and will be able to travel at speeds up to 10 knots per hour. The MAS is half the size the original Mayflower, 15 metres in length weighs just one-twelfth of the original ship (which weighed 180 tonnes).

Onboard the MAS will be a sophisticated AI system. Called the ‘AI Captain’, AI, cloud and edge technologies will independently detect and classify ships, buoys and other obstacles such as land, man-made breakwater and debris, taking appropriate avoidance action where necessary. The Virtual Mayflower Team has, once again, supported MSUBS Ltd by developing a unique virtual animation depicting how the AI Captain will function.

The work was so well received, it was even shown on one of the large-screen displays in Times Square in New York during October 2019.

Members of the HIT Team mentioned earlier are about to embark on several observational studies of submersible and surface maritime vessels, and how they exploit Human-Machine Teams, for such tasks as surveillance, command and control and remote environment situational awareness. Amongst the systems under study are the Promare/MSUBS Mayflower Autonomous Ship (MAS).

Others include MSUBS’ next-generation autonomous submersible and a small Unmanned Surface Vessel used by Cornwall-based Swathe Services. These observations, together with focused interviews with the systems’ developers and operators, will add to knowledge about human trust in automated systems and will inform potential control room and interface designs. Of particular interest with the MAS is how the remote teams will monitor and track the progress of the ship, how the onboard imaging and Artificial Intelligence subsystems deal with, and make decisions in cases of uncertainty how these onboard processes are communicated to the operators/supervisors on shore.

The research, which has a strong Human Factors underpinning, is focused on trust generation and resilience within Human-Autonomy Teams, testing the hypothesis that autonomous systems need to be transparent, explainable and reliable, keeping the human in-the-loop and encouraging interdependence and intercommunication between systems and operators. Autonomous systems should not be developed to replace skilled human operators, or to remove Human Factors in design; instead, they should augment the teams’ capabilities as a whole.

To this end, the research is currently exploiting cognitive psychology and Human Factors techniques, interviewing subject matter experts and analysing accidents and near-misses that occurred with misclassification of contacts as a cause. Specifically, this will enable future developers to better understand how sonar data returns (in particular) are used to classify vessels, and how the safety surrounding this process could be improved through the effective utilisation of autonomous systems.