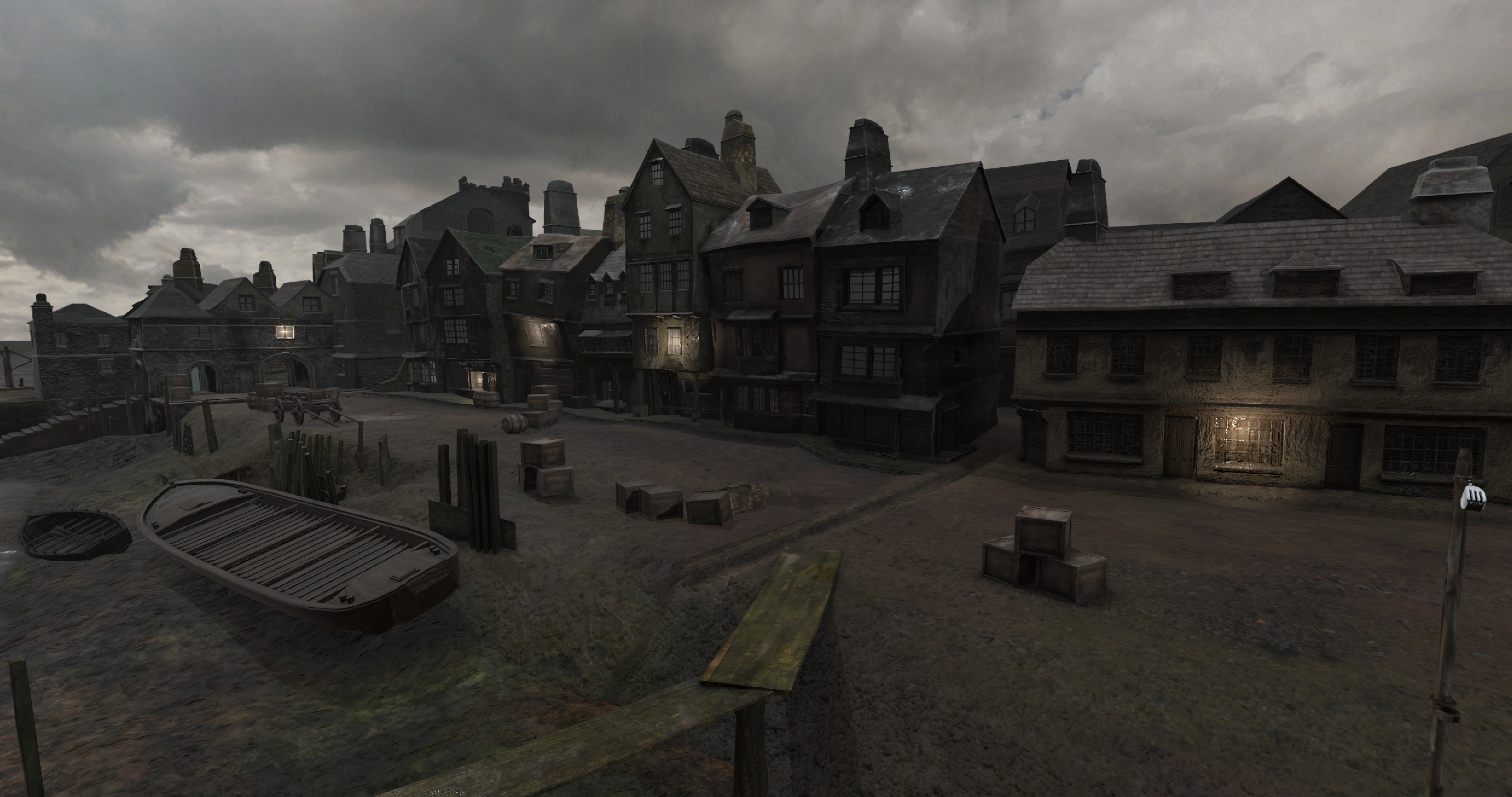 THE BARBICAN TERRAIN TOPOGRAPHY, THE FEATURES AND SHAPE (E.G CONTOURS) OF THE LAND WITHOUT MAN-MADE OBJECTS WAS DEVELOPED USING 3D MAP GENERATOR.

This software enables the user to create a grayscale heightmap of a selected area of terrain and then convert that heightmap into a 3D digital terrain model, modifying the result with a set of design tools. The 3D result can be endowed with textures, contours, water levels and lighting effects.

The heightmap for Plymouth’s Barbican is shown here:

The next step involved populating as much of the topographical terrain model with man-made objects as time allowed. Having collected as many images, maps, photographs and books relating to the history of the Barbican as we could, we then searched for different items of street furniture and period objects.

These were obtained from online 3D repositories such as Turbosquid and the Unity Asset Store, both of which contained a wealth of 3D Mediaeval assets which we considered to be appropriate for the Virtual Barbican exercise.

The street and building layouts were built in the form of 3D grey blocks, in some cases using a Google Earth plan view of the current Barbican, focusing on buildings that were known to exist in the 1620s. We undertook this part of the build process again using the Blender toolkit, exporting to Unity in the form of a series of FBX files when complete.

One of the more challenging parts of the model to build, especially given the conflicting sizes and layouts witnessed in many of the maps and plans around the time of the Pilgrims’ voyage, was Plymouth Castle.

The Castle was built in the 15th century, long before today’s impressive Royal Citadel existed, to defend Plymouth’s harbour and, thus, the growing town. At the time the Pilgrims left Plymouth, it had fallen into a considerable state of repair. Although remnants of the castle existed until the 19th century, parts of it being used as a prison and workhouse, a quarry and even a rubbish dump.

Today, only part of an outer gatehouse remains. A local 18th-century mason’s account of the two surviving towers and wall foundations provided us with the necessary blueprint to pinpoint, as best we could, the local street layout (and Castle Steps) and the location of some of the long lost buildings.

Selecting a ‘realistic’ location for the Mayflower Steps location was also important, especially as these would feature strongly in the sequence of events in the final VR scenario. There is much controversy surrounding the true location of the Steps today. Some believe they are located under the female toilets in the Admiral MacBride pub, just a few yards away from today’s Mayflower Steps monument. Others believe them to be in another location, very close nearby, but are sworn to secrecy (as are we)!

Many of today’s buildings, even those that were around within the past three centuries, right up to the time of the Second World War when Plymouth was decimated by Nazi bombers, did not exist during the time of the Pilgrims. However, one early engraving of the Steps, The Barbican or South Gate, published as a picture in Eldred & Wright’s Streets of Old Plymouth (1901), depicted a small building that was also evident much later, in a pre-war photo. This discovery seemed to suggest that the road layout in that vicinity had not altered significantly in all those years.

Many of the textures used to endow the otherwise flat and featureless building models created were based on digital photographs taken in and around the Barbican and, where necessary, modified using Photoshop by Team member Chris Harvey. Surviving photos of mediaeval buildings located further into the town were used to fill in the gaps and to give the architecture of the time some degree of visual accuracy.

Again, given the Team’s limited resources, not all of the Virtual Barbican could be completed in the time available, to the level of detail we all desired. Nevertheless, for the September 2020 demonstrations, we were able to achieve some of the following: